The Most Powerful Production Car….Ever

The Most Powerful Production Car….Ever 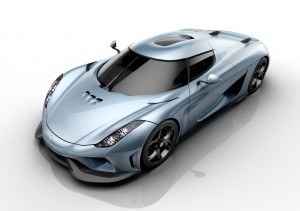 The supercar Koenigsegg has created is called the Regera. This vehicle uses a hybrid powertrain, which utilizes a 5.0-liter twin-turbo V8 motor, combined with three electric engines which makes is so fast and powerful it puts all other cars to shame. The Regera can make up to 1,500 HP and 2,000 pound-feet of torque, which according to Jalopnik, it could be the most powerful production car ever made. According to Koenigsegg, it says that the Regera’s three electric engines can produce a whopping 300 more HP than its closest rivals. On top of the crazy number of HP, we can see that the Regera can go from 0-60 MPH in an amazing 2.8 seconds. The estimate for the top speed is projected to somewhere around 250 MPH in about 20 seconds, which will be make running to the store for milk a very quick trip.

It won’t be easy to get your hands on one of these prized beauties. The Regera will be created with a limited production number of only 80 units, with each to have an estimated price tag of $1.89M. You must pay a high price to own one of the most powerful production vehicles ever made, but we feel that once you drive it, it will all seem worth every penny for this amazing supercar. The future is a lot closer then we think and it will only be a matter of time with the combination of hybrid and electric power that we can see supercars hit 300 MPH and 2000 HP.

Remanns is the best website when it comes to ...
END_OF_DOCUMENT_TOKEN_TO_BE_REPLACED

By: Remanns.com What comes about when you take the ...
END_OF_DOCUMENT_TOKEN_TO_BE_REPLACED

Remanufactured engines are totally different than a used or rebuilt ...
END_OF_DOCUMENT_TOKEN_TO_BE_REPLACED

Remanns is the best website when it comes to ...
END_OF_DOCUMENT_TOKEN_TO_BE_REPLACED